Well, I am getting worse and worse about scheduling my blog, and I apologize!  Today I will feature a recipe that was meant for World Wednesday this week called Thai Peanut Vegetable Pizza.  I got inspiration for this meal from needing to use up the Thia Peanut Sauce I made in bulk a while ago, and the craving for an old favorite pizza from a restaurant in Spokane called Rock City Grill.  Their pizza had much more cheese than mine, and was loaded with shrimp and chicken, instead of the loads of veggies on top of mine. 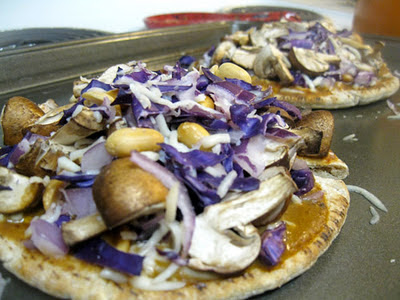 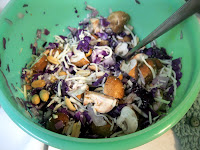 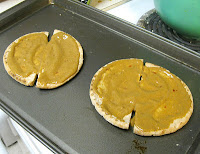 Directions:  Preheat oven to 200 degrees F.  Place pitas on an oven sheet and bake for ten minutes, to warm the base of the pizza.  In a medium sized bowl, mix together the red cabbage, mushrooms, red onion, green onion, peanuts and cheese.  When pitas are done warming, heat the oven up to 225 degrees F while you assemble the pizzas.  Pour and spread a good amount of the Thai Peanut Sauce on top of each pita, then sprinkle fresh chopped basil onto the sauced pizzas.  The, place a heaping amount of the cheese veggie mixture on top.  Bake for 30 minutes, or until cheese is well melted.  Serve and enjoy! 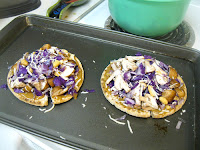 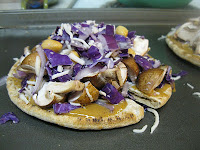 Amy's Notes:  The veggie cheese mixture is enough to make around 6 pizzas if you are liberal with the toppings like I am.  For the sauce, I always make it in advance and save the sauce and any leftover toppings for pizzas another day.  To make this recipe quick, just put together the pizza and zap in the microwave for less than one minute.  I did this for my lunch earlier this week and it was still pretty good, but the veggies weren't quite as roasted and the "dough" was not as chewy.  Later in the week when I was making pizzas I tried adding kale to the mixture and found it delicious!  Tonight when I made it for me and my dad who is visiting for the weekend for WSU Dad's Weekend, my toppings were cheese, shittaki mushrooms, red onion, green onion, belgium endive, and kale.  Very yummy! 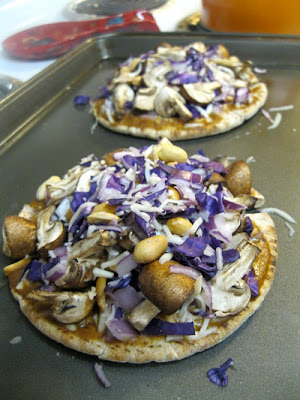 Since it's Dad's Weekend here at WSU, I thought I'd talk a little bit about dads and food!  My dad an I have always had similar tastes in foods.  We both have liked somewhat odd-ball things such as thai pizzas, ruebens, tartar sauce with our fries, (we love) pumpkin pie, (we both go nuts over, you guessed it) nuts, we both chew on ice, and like to have oatmeal in the morning.  Some memories of my dad growing up were when he made us french toast in the mornings sometimes on the weekends.  There was nothing particularly fancy about how he made french toast, but it was some of the best!  Because we are both eating a nutritarian diet now, I will not be making him french toast for breakfast this weekend.  I'll be making Pomegranate Muesli (from Dr. Fuhrman's member center recipe guide), which is pretty much cooked or uncooked oats with fruit and almond milk or orange juice.  More on this later in the weekend!

My dad and I both have a difficult time stopping snacking when we eat things like nuts (or cookies before ETL).  Are there any odd eating habits you share with family members?  Do you think our taste buds are genetically similar to family?
Posted by Amy's Nutritarian Kitchen at 2:58 PM