Happy Groundhog Day to everyone!  Unfortunately, news sources have reported that Punxsutawney Phil saw his shadow, and there will be six more weeks of winter.  That's too bad, but in six weeks I will be on Spring Break in Vegas, so the warm weather will be even more welcomed!  Last Groundhog Day, Kevin introduced me to the movie Groundhog Day.  It's a very cute and funny older movie that will now become Kevin and my GhD tradition!

Now on to the SUPERBOWL!  Whether you are a Giants fan, a Patriots fan, or have no idea who is playing, you have got to be excited for Super Bowl festivities!  This is a day that revolves around at least two of the seven deadly sins: gluttony and sloth (pride, wrath, and envy depending on how big of football fan you are and who wins).  It is a day of excess and laziness that is participated in by millions of Americans.  But what do nutritarians do this day?  We eat health promoting foods in excess and stay away from SAD (Standard American Diet that promotes Western Diseases) foods, and we stay active!

Amy's Strategies to avoid overeating and being lazy this Sunday:

1.  Drink water!  Super Bowl Sunday is often a day that a lot of drinking alcohol is involved.  Whether your poison is light beer, dark beer, wine, scotch, coke & rums, martinis, or margaritas, alcohol is not health promoting (Ok maybe red wine is, but I haven't done any research on this yet!).  I know that I will have my beer or two during the game, I am a college student and often times it is part of the atmosphere that I enjoy.  I particularly love the tastes of dark and IPA beers, so I will indulge in this.  But, my strategy between every beer is to drink at least one big glass of water!  This will help to hydrate you throughout the day, especially if you are drinking alcohol or eating any saltier foods.

2. Stay on your feet! Feel free to be active while watching the game!  Be the person to get other people refills of drinks or food, take trash or dishes to the kitchen, jump up when there's an awesome play, heck, just stand and watch the game!  The more you're moving, the more calories you'll burn, so stand and move!

3. Bring the healthy option! If you are hosting the party, lucky you!  You get to choose most of what is fed at the party, so take advantage of this by providing delicious and healthy options.  If you are going to a Super Bowl party, bring the healthy option!  Veggie trays are always appreciated by hosts, and even more so, healthy dips for chips and those veggies!  Limit yourself to the other food if you think it's not the best for you, but eat as much as you want of what you brought; you know what goes into it!

Here is the healthier option I am bringing to Kevin's Super Bowl party this year (I'm also bringing some vegan chili for myself, because I think everyone else is having a bigger main meat dish that I won't want to eat). 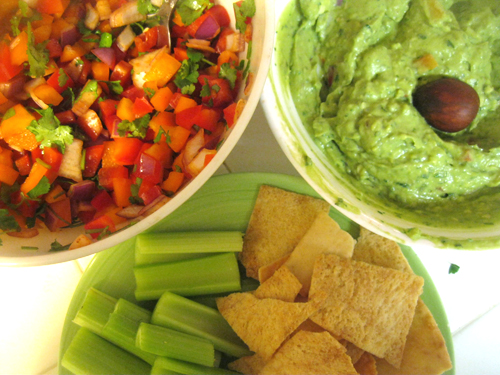 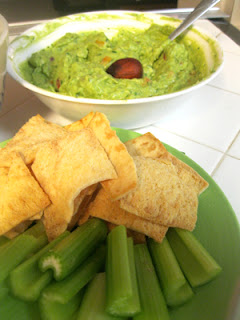 Directions:  In a small bowl, combine 1/4 cup each of chopped red onion, red bell pepper, and orange bell pepper.  Place the remainder of the chopped red and orange bell pepper into a bowl, and the red onion into yet another separate bowl.  In a small food processor, add the peeled garlic cloves, seeded jalapeno, and a large handful of the cilantro (mostly stems removed).  Process until well minced.  Add the minced garlic, jalapeno, and cilantro to the bowl with 1/4 cup of the rest of the ingredients.  Roughly chop the rest of the cilantro and add it to the bowl of red onions only.  To this bowl, add 2 teaspoon of lime juice,  1 t of rice vinegar, 1/4 t paprika, and 1/4 t cayenne pepper.  Stir and allow to marinade.  Next, cut the avacados and scoop the soft, green flesh into the food processor (no need to clean it out from the last chopping), and process until creamy smooth.  Place the mashed avacados in a medium sized bowl and add 1 Tablespoon of lime juice and 3 teaspoons of rice vinegar and stir in well.  Then, add the bowl with 1/4 c of everything and the minced jalapeno, garlic, and cilantro to the mashed avacados.  Fold in well and add salt to desired taste for the guacamole.  In another large bowl, combine the red onion and cilantro with the chopped peppers to make the mexi-salad.  Serve these with pita chips and veggies to scoop and dip.  Enjoy Super Bowl XLVI!

Pictures of separate bowls, and what to combine: 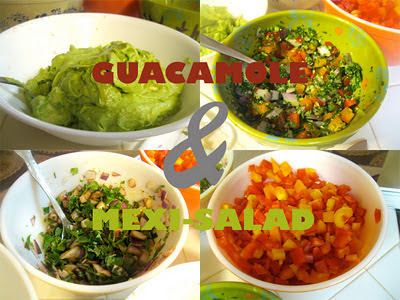 Amy's Notes: I love my guacamole to be a bit chunkier with veggies, so when I tried out some of this guacamole yesterday, I added a bunch of the mexi-salad to it and scooped it up with celery and pita chips, YUM!  In this recipe you can add any veggies that you like.  Usually you might find some tomatoes in the guacamole, but I omitted them this time because none of the tomatoes at my grocery store were a good price, or looked very good.  Saving money and being versatile with recipes is all what I'm about! 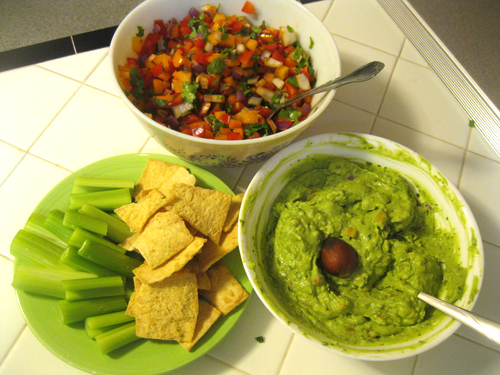 What's your bad eating temptation during Super Bowls and what are you going to do this year to change that?
Posted by Amy's Nutritarian Kitchen at 5:28 PM