This Instant Pot and I are going to be best friends!

Hi folks!  Earlier this week, on Monday, I received one of two packages I had been waiting for: Lorna Sass' Great Vegetarian Cooking Under Pressure.  I had mentioned in a post a few weeks ago that I was looking into getting a pressure cooker and a cookbook to go along with it.  I settled on this cookbook, which was published in 1994, to start my love affair with pressure cooking because...

1.) Chef AJ recommends the book here,
2.) the reviews said that this cookbook is almost completely vegan besides occasional suggested cheese toppings that could be replaced with nutritional yeast if I really wanted,
3.) the reviews said that even non-vegetarians will love (a.k.a. my meat and potatoes husband), and
4.) most reviews raved about their favorite recipe and I wanted to TRY THEM ALL! 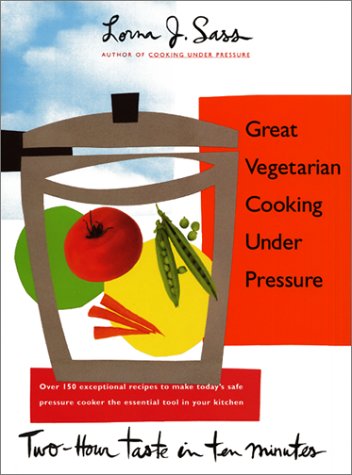 After spending most of Monday evening reading soaking up its recipes and tips, and fantasizing about myself with a clean kitchen and an electric pressure cooker quietly and rapidly cooking my delicious healthy food, I hopped onto my computer to check the shipment tracking on the InstantPot IP-DUO60 that I had ordered at the same time as the book.

Amazon said it hadn't even been shipped! :(  I knew it was due to arrive anytime between October 7th to the 10th, but it was the 6th and it hadn't even left the warehouse!?!  Poo poo!

After going back to work on Tuesday (I took Monday off to recover from Leavenworth, and actually ended up with a little cold to nurse), I spent all day thinking about what recipes I wanted to make out of the book and how I wished my Instant Pot would get here sooner!

Around my lunch break on Tuesday, I checked with Amazon again for the tracking.  Hopefully it had left the warehouse by now....  It said "Delivered"!  How on earth that could happen is beyond me, but it was waiting at home for me!  After a few more hours crawled by, I left work to stop at my favorite farmer's stand to pick up some produce I would need, and then headed home. 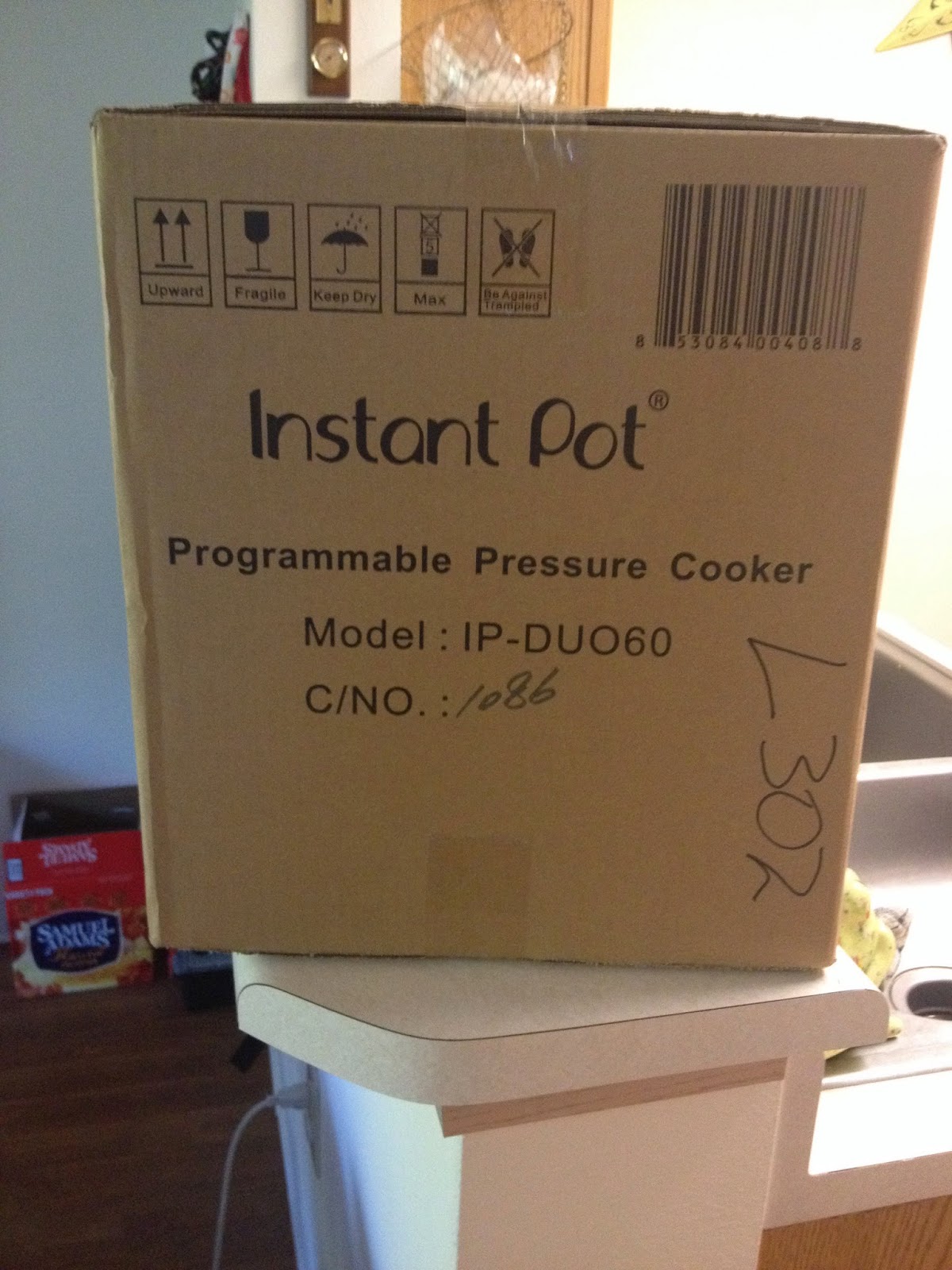 I eagerly unpacked my produce and opened my lovely, large InstantPot package!

First thing I did: read the getting started directions of course, I am a woman!  Then I washed the new parts and started a quick soak on some chickpeas for a soup I was planning on making for dinner.  Normally I pre-soak my beans, but when a pressure cooker is just waiting to be used, a quick soak would have to do. 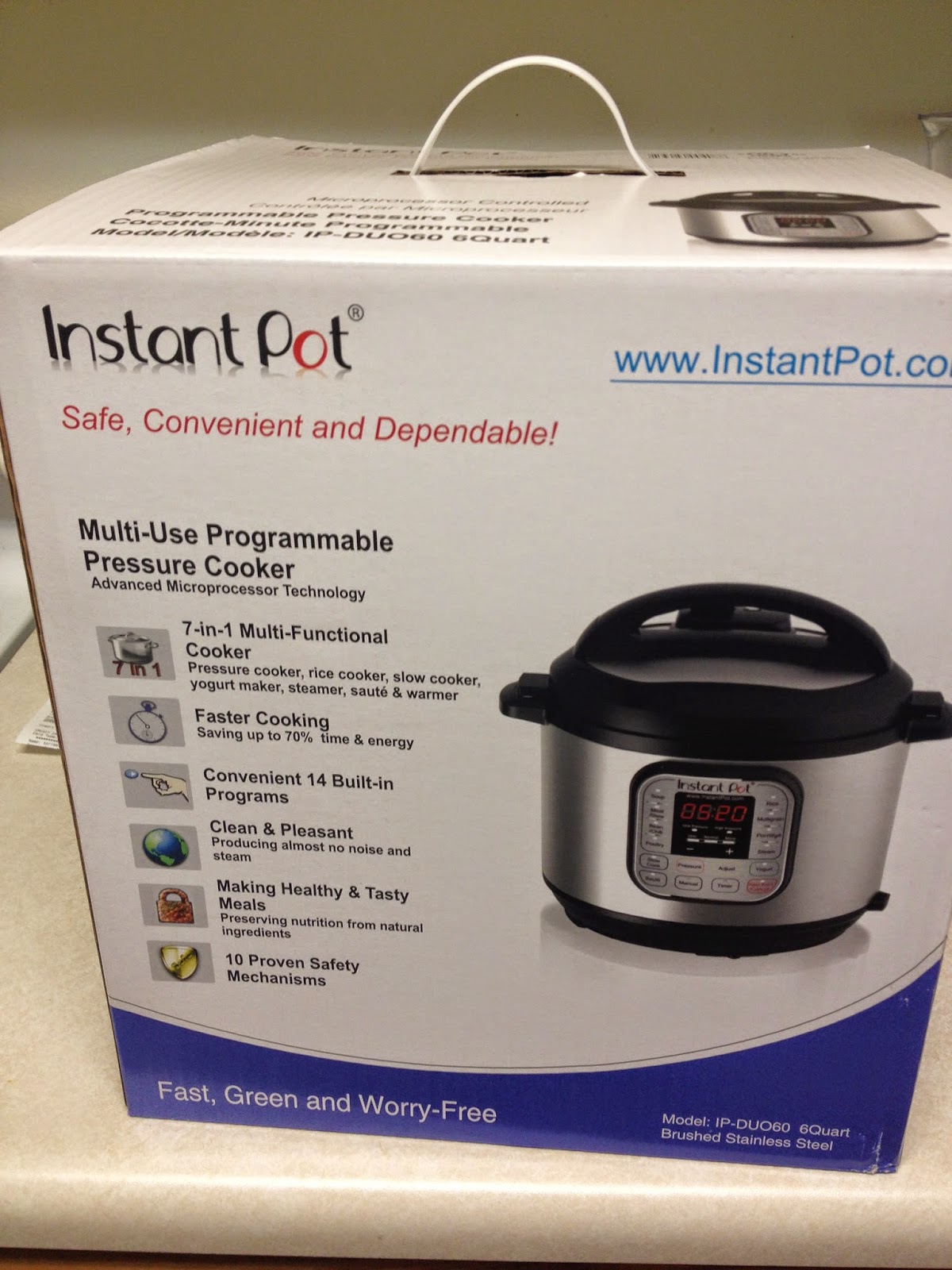 Little did I know, the pressure cooker also works to quickly quick-soak dried beans.  A normal quick soak involves bringing a pot with dried beans up to a boil for a few minutes, then allowing the beans to stand in the hot water off of the burner for 1 hour, before then cooking the beans for 2+ hours to get them edible. 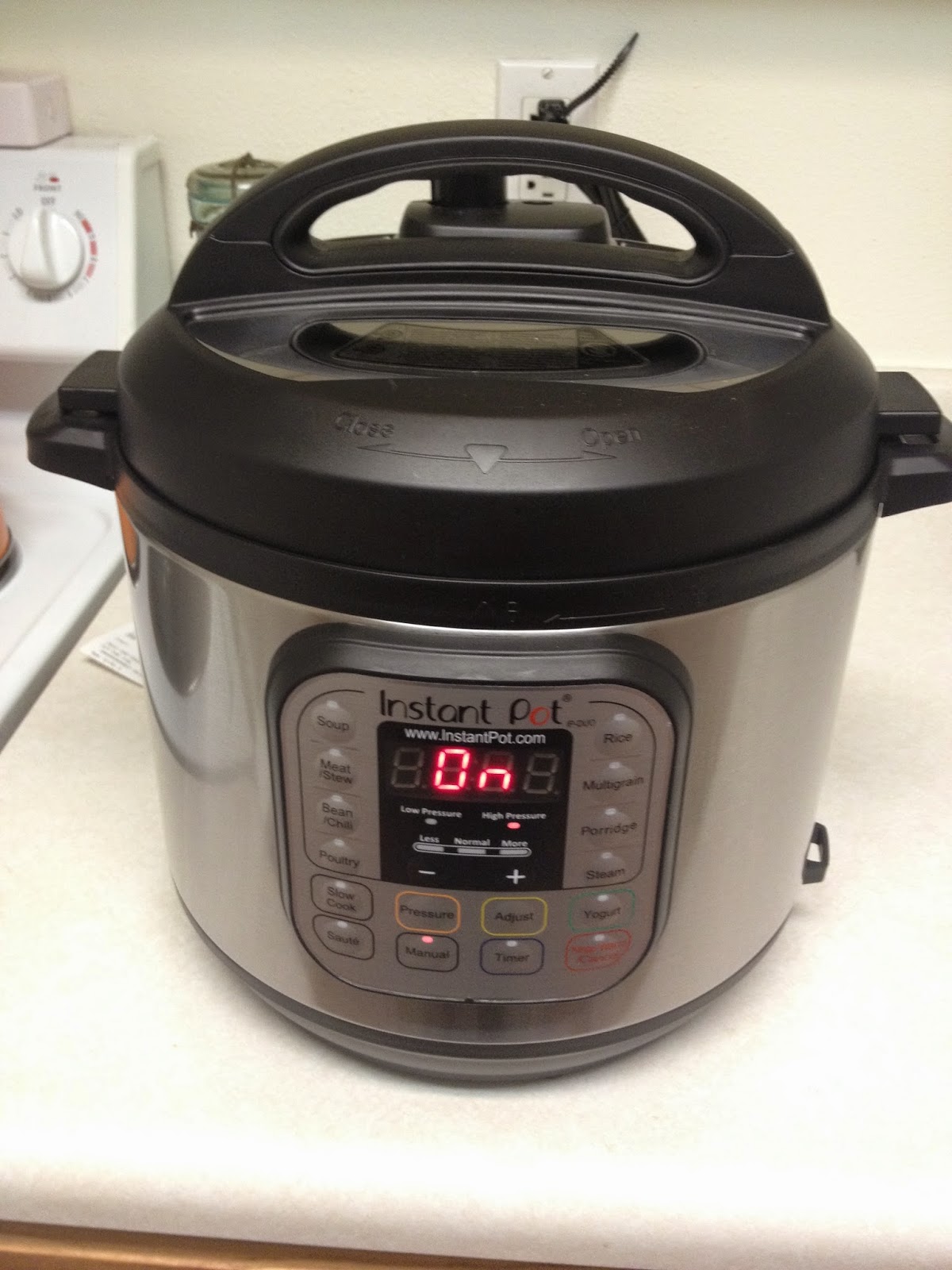 A quick soak in a pressure cooker combined 1 cup of dried chickpeas (all I needed for the recipe, but it would fit more) with 3 cups of water.  I locked the lid and set the InstantPot to high pressure for 20 minutes, then allowed the pressure to come down naturally.  This took a total of about 35 minutes to quick soak, rather than 1 hour plus.  This step could also be avoided by soaking beans overnight, which I will do from now on, but this night I didn't expect my PC to be here so soon.

(Sorry, I wish I had more pictures of the process to share, but I was just too excited to get started that I forgot to grab my camera.  More pictures will be coming when I get the hang of things!)

While the beans were cooking, I prepped the ingredients for the soup, and even had time to clean up the kitchen.  After draining and rinsing the quick-soaked beans, I filled the pot with all of the ingredients for Lorna Sass' Chickpea Soup Italiano.  Set the pot for 16 minutes at high pressure, then allowed the pressure to come down naturally, for a total of around 30 minutes.

During the times the pot was cooking, there were no sounds, no dreaded hissing of the pressure cooker horror stories you may have heard.  There was actually no times that I felt that it felt unsafe, which is a relief.

I had the Chickpea Soup Italiano for dinner that night and it was delicious!  I sent Kevin to work with the leftovers from the half batch the next day. (His pictures aren't as pretty as mine would have been ;)).

After packing away the leftover soup, I made a half batch of Lorna's Garlicy Lentil Soup.  Since lentils cook even faster than dried beans, this soup only needed 7 minutes at high pressure, with a natural pressure release.  I found that I needed to add a bit more stock at the end than it had called for, but it made for a nice thick lentil soup.  This was my lunch today and the day before, and the wonderful aroma alone may have convinced a coworker of mine to get the same pressure cooker. 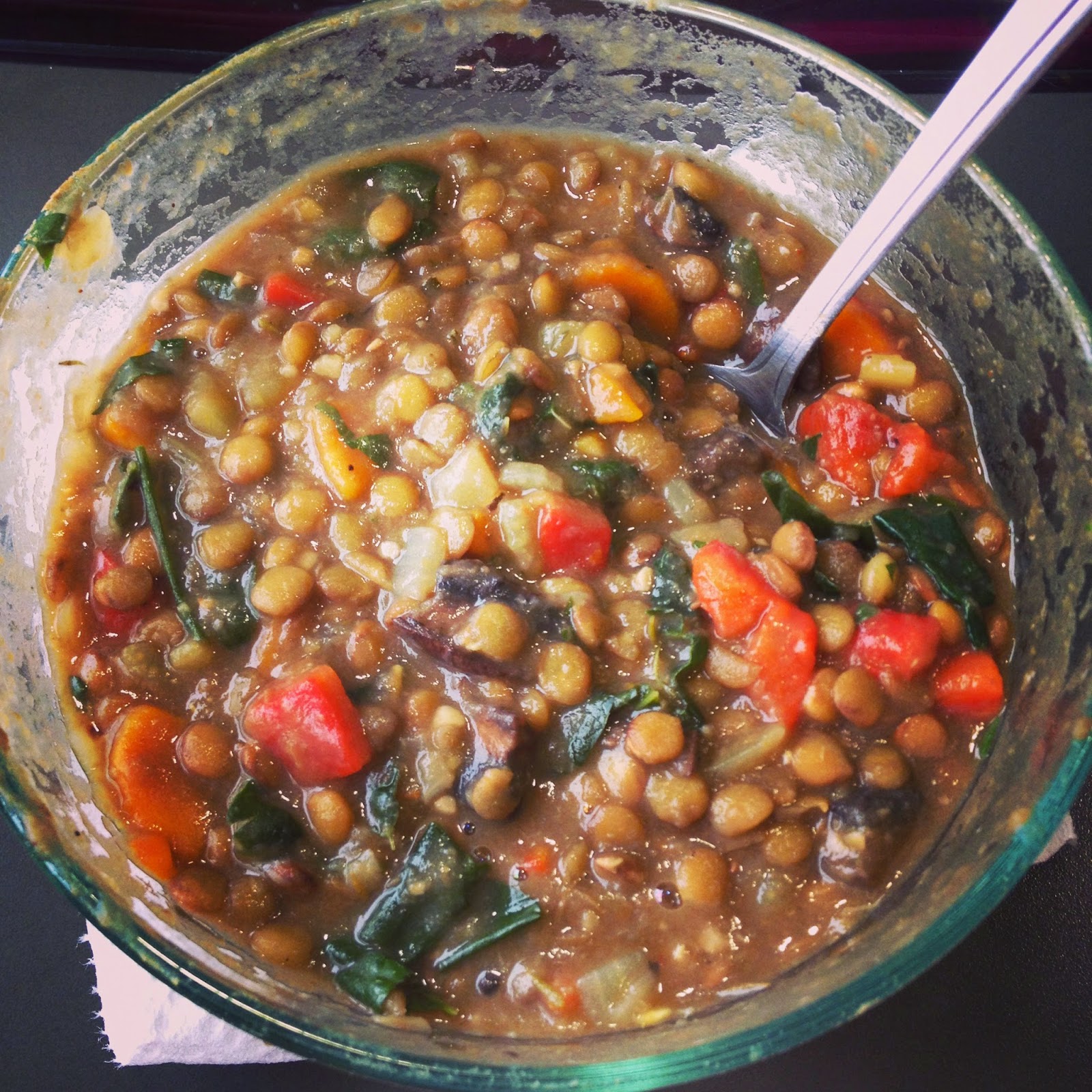 Then, this morning I steamed my breakfast kale in it.  This went super quickly with only 3 minutes at high pressure and a quick release.  No pictures of this, sorry.

As you can tell, I'm super giddy about my new pressure cooker.  I may have a bit of an hiatus of creating recipes for the blog as I explore how to use this new wonderful contraption, but I will keep you guys posted on how I'm doing through some of my other social media accounts (see top right of blog for links).