In our house, we have potato leek soup a couple of times a month.  The facts that potatoes keep on the shelf so well, are often the last produce around before grocery shopping day, and cook relatively quickly have made this soup one of our main staples.

When I first became a Nutritarian, I really missed the creaminess of thick soups and sauces, so potato leek soup was one of my first favorites because it gives you that creaminess without any cow cream.  To make a similar recipe, but on the stovetop, refer to Katie's Creamy Potato Soup recipe here.  This was a recipe I adapted from my sister-in-law that I love love!

Now-a-days, I make my potato leek soup a bit differently, and in "my precious" pressure cooker.  Quite literally, I called it "my precious" in our move last weekend while a coworker of Kevin's was packing it.  Yep...  I went full-on LOTR Gollum with an appliance, but if you have one, you will know what I mean.

In the recipe I am about to share with you, I like to add lots of veggies besides potatoes and leeks.  I often throw in whatever sounds good in my fridge that needs to be used up, but this is my general recipe.  In the pressure cooker, this takes only 6 minutes at pressure with a quick release at the end! 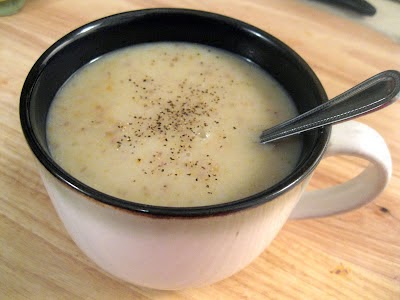 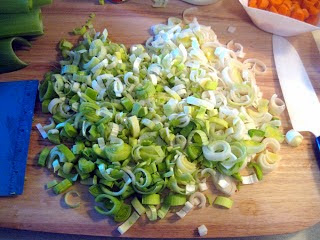 Instructions:
1.)  On the saute function, saute the chopped leeks and minced garlic for 3-5 minutes, adding water as needed to prevent burning.
2.)  Add in the remainder of the ingredients EXCEPT for the plant-based milk.  Lock the pressure cooker lid in place and cook at high pressure for 5-7 minutes.
3.)  After the allotted time, do a manual quick release of the pressure, or allow the pressure to come down naturally.
4.)  With an immersion blender or high-powered blender, blend the soup to your desired thickness, being cautious not to overprocess.  Potatoes can get a bit gummy if they are blended too much.
5.)  Stir in the desired amount of non-dairy milk.  Season with salt and pepper, and serve warm topped with fresh herbs, nutritional yeast, and/or green onion.

Sometimes I substitute one leek with one yellow onion or two bunches of green onions, depending on the price of leeks during the year and my pantry stock of onions.  I find the flavor to be just as nice, and save me a bit of money as well.

For the dried herbs, I like to mix it up from batch to batch, but I generally add at least 1 Tbsp total of dried herbs.  My favorite lately is Herbs de Provence, but you could also do a mixture of thyme, rosemary, fennel seeds, basil, oregano, parsley, marjoram, sage, etc.

Posted by Amy's Nutritarian Kitchen at 11:06 AM