It took me quite a while to warm up to beets, even after I became a Nutritarian.  The first beets I remember trying were in a can.  Several weeks into being a new Nutritarian, I was looking for ways to bring some interesting flavors to my daily salads.  I threw the can of crinkle cut beets into my cart and popped them open to try once I got home.

Terrible.  They tasted almost metallic (probably from the can now that I think about it).  I forced a few more slices down before I determined beets just weren't going to be part of my salad thing.  At least not at the time, anyway.

A few years later I saw some golden beets at a farmers' market and decided to give it a try again, this time with the fresh stuff.  I ended up liking those beets both roasted and steamed.  After that, I gave red beets a try again and decided my first experience was not telling enough of this roots' wonderful culinary (and health) virtues.

I've heard some people say that beets can "taste like dirt", and it is true that they have a more earthy taste, but then again so do a lot of different wines, some cheeses, as well as very common kitchen items like mushrooms and lentils.  Earthy is a fun flavor to play with, especially by adding ingredients with acidic, nutty, and sweet notes. 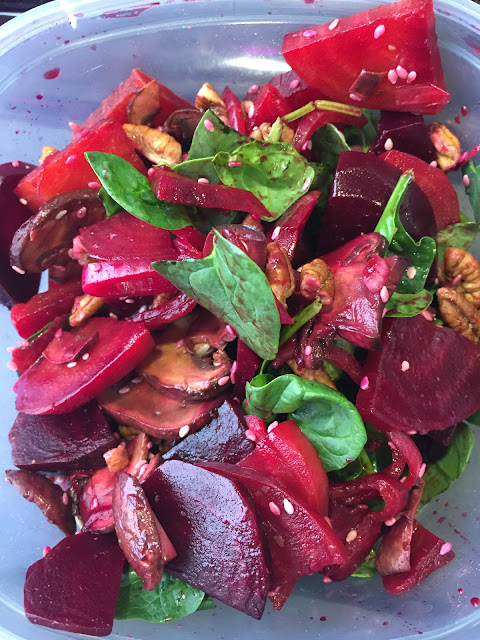 Instructions:
1.)  Cut the tops and root tips off of the beets.  Wash and peel.  Cut in half or quarters if the beets are large.  Place in a steamer basket and steam on the stove top for about 15 minutes, until the beets are fork tender.  Remove from heat and dunk the steamer basket into an ice bath to stop the cooking and cool the beets down.
*** If you have a pressure cooker, you can steam your beets that much faster.  Check your pressure cooker manual charts for the correct directions and time needed.***

2.)  Slice the cooked beets into 1/4-1/2 inch slices.  In a large bowl combine the sliced beets, mushrooms, red onion, and sesame seeds.
3.)  In a small bowl, whisk together the balsamic vinegar, soy sauce, and sweetener.  Pour the liquid over the beet mixture and stir to combine well.  Let marinade in the fridge for at least 1 hour and up to 4 days.
4.)  Serve chilled or at room temperature on top of fresh spinach or kale (bonus points if you use the beet top greens!).  Sprinkle with chopped almonds, pecans, or walnuts for an extra treat.

Amy's Notes:
For those who haven't tried beets before, or if it has been a while, red beets have quite a bit of pigment in them and their juices that can stain counter tops, cutting boards, sinks, hands, and ahem... personal waste removal.  Just take some precautions by wearing gloves and using an old cutting board, and cleaning up splashes on counters and sinks with a damp cloth as they happen.  Also don't be alarmed when your poo comes out red-ish.  You are not dying, nor are you in need of medical assistance.  Keep calm and know that you got lots of fiber, vitamins, and nutrients! 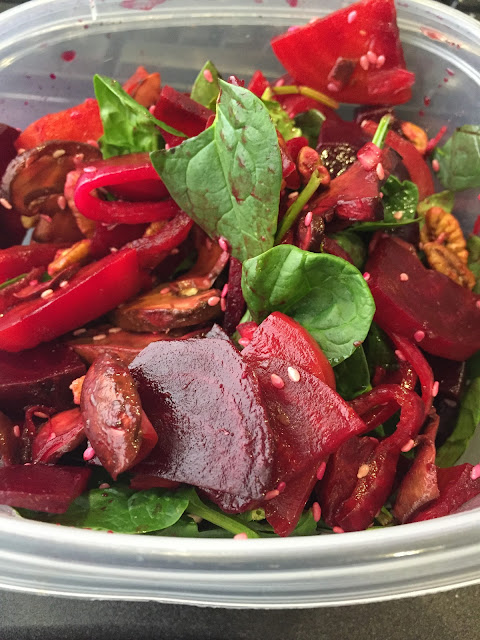 Posted by Amy's Nutritarian Kitchen at 7:00 AM