Baby on the Way!

I've been absent lately because... some big changes have been happening in our life.

Early in February I started to feel not quite right in my stomach.  There had been a stomach bug going around my office, so for a few days I chalked it up to that.  A week later and a day or two passed my usual "lady time" start date, I took a test with two very solid pink lines.

A week later the doctor confirmed it: I was pregnant with our first child!

While we weren't necessarily trying to get pregnant... Ok, we weren't trying at all.  This was an oops.... but totally an exciting, very welcomed oops.  We had actually been talking that same week about setting money aside to save for a big Europe trip in the coming year or two before starting to have kids.  Well, plans change!

I want to say that the first trimester was a cake walk and I ate perfectly Nutritarian, but no.  I was moderately nauseous from when we found out until about week 11.  I never ended up getting sick, but I still wasn't feeling like my normal self.  I had some pretty bad food adversions, and mostly survived off of whole wheat toast with avocado or peanut butter, bean burgers, lots of bananas, saltine crackers, and ginger ale.  While not ideal, I did my best and made it through to the second trimester.

Oh my gosh, it is like night and day.  I have my energy back, and I was able to start eating my usual foods with lots of veggies.  Tomato sauce and I still have a problem, but I'm sure someday we'll be friends again.  I'm also hungry all. the. damn. time.  Snacking is my game!

My only other issue with eating is that I would get tired of a certain food quickly.  What sounds great one day sounds like the worst the next, so my usual habit of cooking a large batch of soup or stew to eat throughout the week was not working.  A lot of my food was going to waste and we were spending more on groceries than usual.  I just didn't have any inspiration nor motivation to create different meals throughout the week that would fill me up, keep the groceries cheap, and that I wouldn't make too many servings of one thing.

A few weeks ago I remembered that Lindsay Nixon from Happy Herbivore had a plant-based meal planning service called Meal Mentor, so I decided to give the free sample meal plan a try.  The food was pretty good, but most importantly I got VARIETY without thinking twice about what to make.  I became a monthly member and have loved it ever since.  (That is also why I've been a bit MIA, I just haven't had any new recipes of my own to share.)

Now, this isn't to advertise for Meal Mentor or say that everyone should do it, but right now as I'm preparing to be huge and hot in the summer, and a busy mom in the fall, batch cooking all of my weekly meals in one night just works.  They are not exactly Nutritarian, as they have more potatoes and not quite as much greens, but for my increased hunger and need for calories, they are fitting the bill perfect.  If you guys have any questions about it, feel free to ask.

So, to update you on exactly where I am in the pregnancy, I am 19 weeks as of today, putting me due early October.  My baby app tells me that he/she is as big as a mango and about 6 inches long and 1/2 pound in weight.  I'm at that "oh so lovely stage" where my clothes are getting a bit tight and uncomfortable.  I don't look outright pregnant, but just a bit chubbier in the tummy than usual.  Other than being hungry more often and occasional lower back aches, my symptoms have been a breeze.

We had our first ultrasound over a month ago at week 14 because my midwife couldn't find a heartbeat with a small handheld doppler at my group prenatal appointment.  She thought maybe I wasn't as far along as I thought and wanted to get an ultrasound to see the heartbeat and get measurements for how large the baby was.  Of course I worried and couldn't sleep the whole night before the ultrasound thinking something was wrong, but come the appointment, the heartbeat was easy-peasy to find, and the measurements told me I was exactly at 14 weeks like I thought.  (Apparently my placenta is towards the front, making it harder to hear earlier heartbeats with a handheld doppler.) 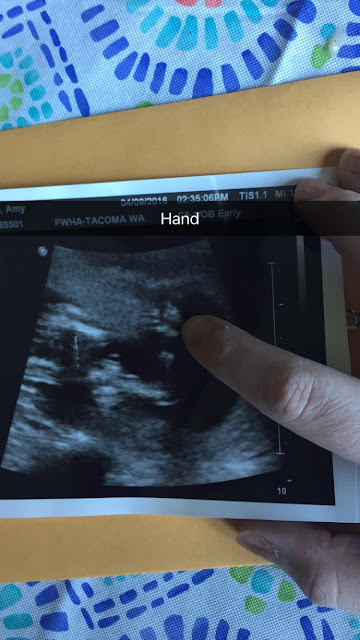 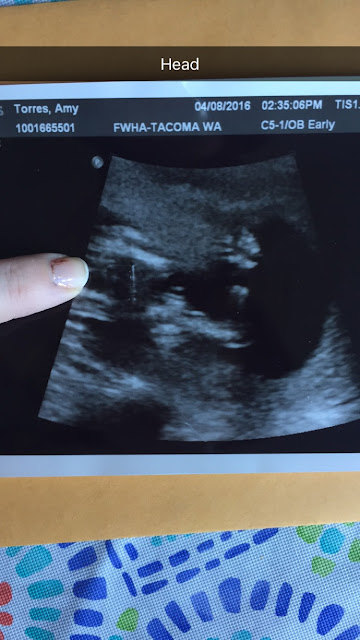 The ultrasound was so neat to see in person.  We got to see the baby "jump" its legs a few times, and got to see a top view at the right and left part of the brain.  What amazed me most was how tight it seemed to be in there for him/her.  No wonder babies love to be bundled tight after birth.

We have our next ultrasound (an anatomy ultrasound) June 1st at around 22 weeks.  We are excited to find out if we're having a boy or a girl and to start planning out the nursery.  I'll try to do monthly updates or so until the baby comes.  Stay tuned! 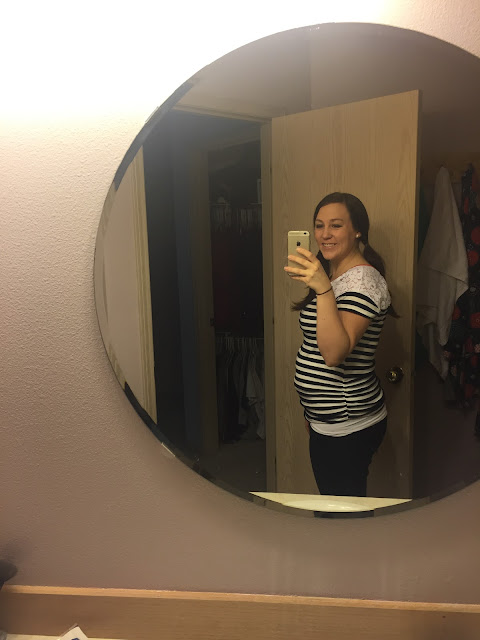 Posted by Amy's Nutritarian Kitchen at 8:30 AM 4 comments: Links to this post