Another week has come and gone.  Seriously?  How is it that time is going so quickly lately?  Last weekend my SIL had her baby girl (She's an absolute doll!  Red hair like mama.), and my husband's coworker had her little boy as well.  An old family friend's wife also had twins this last week.  This has truly been the week of the baby, and it made me stop in my tracks and look at little Ben who is not so little anymore.

At 8.5 months, Ben's personality is growing bigger every day.  He started crawling a few weeks ago and is on the move constantly.  Baby gates and serious baby proofing need to happen very soon in our house.  All of the new babies in the world really made me stop this week and savor those baby snuggles and admire Ben's tiny hands squishing his food, and wrapping around my finger when he nurses.  These moments will be gone before I know it.

We have a busy busy month coming up.  I have mostly been a SAHM, but have been kept on by my company as a temporary on-call employee when they get busy and need extra help.  I got a call from my boss last week to see if I would be up for going across the state to the Spokane office to help them with some organizing before the office has tenant improvements.  A company sponsored trip to go home and see family (and work a little I suppose)?  Heck yes!  I'm picking up a rental car tomorrow, and then Sunday Ben and I leave to go to Spokane for the week.  I'm lucky to have a mama willing and happy to watch Ben while I work for the week, and I'm excited to see some of my old coworkers.

After being in Spokane next week, we'll head back home and then spend the 4th of July holiday with Kevin's family on vacation in Ocean Shores, which is 2 hours away.  After we get back from that we'll turn around and leave the next day to go back to Spokane.  Ben will be staying with my parents over that next weekend while I go to Lake Chelan with my girlfriends for a friend's bachelorette celebration.  This will be the first time I'm away from Ben for longer than a half a day.  I'm sure I'll have a wonderful time relaxing and celebrating with my girls, but I know I'll miss him so much.

After the Lake Chelan weekend I'll go back to Spokane and spend the week there helping my hometown church with Vacation Bible School.  The next weekend Kevin will fly into Spokane and we will go to my friend's wedding and then Ben will be baptized on Sunday before we head back home.  It's a lot of travel, and I'm hoping Ben does well with the drives.  We've driven to Spokane once before a few months ago, and he did great as long as we had frequent stops to eat and get some wiggles out.

Anyways, you came here for the beet salad right?

Beets don't tend to be a very regular vegetable in our house, but when I get a craving for beets, I just have to have them!  Beets are high in phytonutrients and anti-oxidants, and have anti-inflammitory properties.  Beets are also high in folate, manganese, potassium, and copper.  I always think when we get plant-based cravings, it is our bodies needing an extra bit of something that that food is high in.  So, I picked up some beets, steamed them in my InstantPot, and enjoyed them in this salad all week. 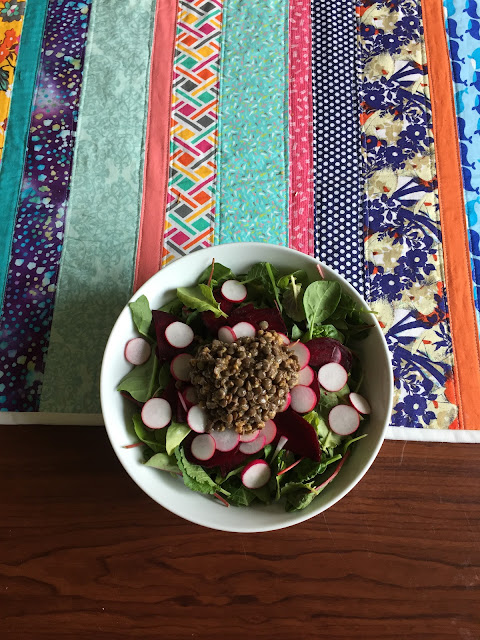 Instructions:
1.)  Prep all ingredients.  See my notes below on how to steam the beets and cook the lentils quickly in the InstantPot.
2.)  In a small bowl mix together the dressing ingredients until smooth and creamy.  Add in the lentils and stir to coat.
3.)  In a large bowl layer the spring greens, beets, and radishes.  Then top with the lentil dressing mixture.  Sprinkle some chopped pecans on top if desired.  Enjoy immediately.

Amy's Notes:
I would suggest steaming several beets and cooking a couple cups of lentils ahead of time to have in salads all week.  If you do this, store the ingredients separately and prep just before eating the salad.

To steam beets - Remove the tops and bottom root with a knife, wash thoroughly.  Place a steamer basket in the InstantPot with the whole beets and 1-2 cups of water.  Set to cook on high for 15 minutes.  Do a quick release or a natural pressure release when the timer is done.  Allow to cool, peel, slice, and store in an airtight container in the fridge for up to 1 week.

To cook the lentils - Rinse and pick through 2 cups of dry brown lentils.  Place then in the InstantPot with 3 1/2-4 cups of water.  Set to cook on high for 10 minutes, and allow for a natural pressure release.  Drain any excess liquid and store in an airtight container in the fridge for up to 1 week.

You can really tweak this recipe to be just how you like it.  Change your type of greens, use golden beets instead of red, use chickpeas instead of lentils, use honey mustard instead of Dijon.  The point is, make a salad and enjoy it!  I sometimes get lax about having a salad every day, but if I change it up from week to week with yummy recipes like this, I really look forward to my greens at lunch. 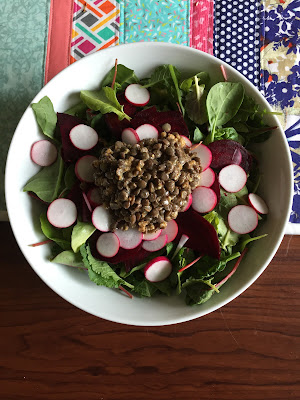 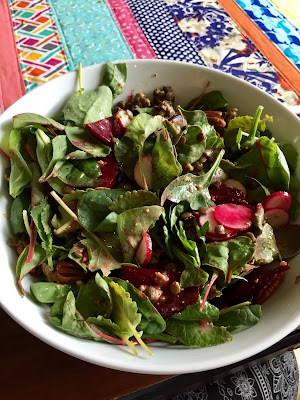 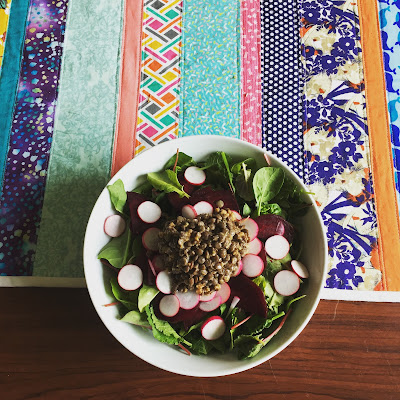 Posted by Amy's Nutritarian Kitchen at 11:48 AM No comments: Links to this post

Ben is 8 months old (!) and he has been eating solids for about a month and a half, the last month of which we have been doing baby led weaning (BLW).  I first heard about BLW from my sister-in-law who did it from 9 months on with my twin nephews who are now three.  For me, it was really nice being able to talk to my sis about some of my fears around BLW and the logistics of cooking for an infant.  If you don't have a friend you can talk to about BLW, I would highly suggest doing a search on YouTube about BLW.  I found a few videos when I was starting off that were very informative and reassuring.

First off, I think "Baby Led Weaning" is not a very good name for what it is.  Yes, when babies start eating solids they will naturally start decreasing their milk intake over time, but with the name "Weaning" I feel like it implies the intention to wean baby.  That is not how I see it.  I see it more as "let's practice eating so that when it comes time that you need more nutrition than breast milk can supply you'll know how to eat and already enjoy a broad range of foods."  I guess that would be too long of acronym!  One phrase I've heard around the BLW world that I like a lot is:

"Food before one is just for fun."

Anyways, my intention is to start Ben off on the right foot of understanding how to use his mouth, tongue, and throat to chew and swallow food safely, but most importantly, to introduce him to a variety of tastes and textures so (hopefully) he isn't a picky eater and loves all fruits and veggies.  I want him to have a good relationship with food that will last a lifetime.  I want him to see that mealtime is enjoyable and social, and food is a form of love within our family.  I want him to enjoy the foods I'm enjoying beside me, rather than spoon feeding him mushy pudding paste that is disguising vegetables with fruit.

One source that I found very helpful as I was getting started was a digital book by Cathleen Woods called Baby Led Weaning for Vegans: 60 Plant-Based Recipes for Babies and Kids that Adults Will Love.  Cathleen writes the Vegan Momma blog and she has a great post about BLW covering some of the basics.  I haven't tried any of the recipes quite yet because Ben is still mostly just eating sticks of fruit and steamed veggies, but it will be a great resource when as we are starting to get into the next phase of eating.

When I first started feeding Ben solids a little after the 6 month mark, I started with mushed banana mixed with breast milk.  After a few tries he LOVED it and would take spoonful after spoonful when we fed him once a day around dinnertime. (I always breastfeed before offering Ben solids.  The vast majority of their nutrition for the first year comes from breast milk, so I don't want to displace that yet.)  We did this for about two weeks before jumping into BLW because we were traveling and I wanted to do more research before starting.


If there is a baby #2 someday, I would still do purees for a week or two before starting BLW.  I feel like the purees at first were easy on his tummy and made his gut bacteria more prepared for the solids that came after. (Also to note, I give Ben powdered probiotics mixed with breast milk once a day.  He had constipation issues when he was 3 or 4 months old and those helped tremendously.)  I also tried purees with green peas, pears, and carrots.  Banana or banana mixtures seemed to be his favorite.


The first BLW food Ben had was also banana.  To prep I cut the top and bottom tips off, then with the peel still on I cut it long ways top to bottom, and then sideways through the middle so you end up with four split banana halves.  I put one piece on his plate and off he went.  Ben is like all babies, and anything he can get his hands on goes straight in his mouth.  He gnawed on it, but most fell out of his mouth and into his lap.  Some pieces crumbled in his hands and never even made it to his mouth.

The food-to-mouth, spit-out-food bit lasted only a week or two before I noticed Ben really chewing and taking down food.  You'll be able to tell if (and sometimes what) they are taking anything down from their BMs the next day or so.

He likes/loves all the fruit, has enjoyed the majority of veggies, and hasn't rejected hardly anything.  I'm now just starting moving into feeding him clumpy things like stews, rice dishes, pasta dishes, veggie/bean burgers, etc.  Last night Ben and I had our first real meal together.   I made wild rice and lentil stew.  It was by far the messiest thing he has eaten, but he LURVED it!  He loved it so much, he practically bathed himself in it (pictures down below).  A bath was definitely needed afterwards.

When I first gave it to him, I handed him a spoon with a scoop of the stew on it.  He seemed to be more interested in gnawing on the spoon and not much food made it into his mouth.  I took the spoon away and just plopped a handful of it on his plate and he seemed to do better after that, although he was quite vocal about letting me know he wasn't happy that the spoon was no longer in his possession. 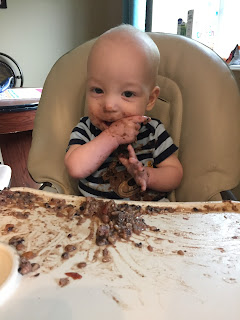 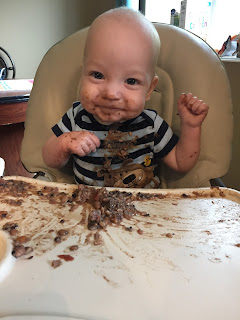 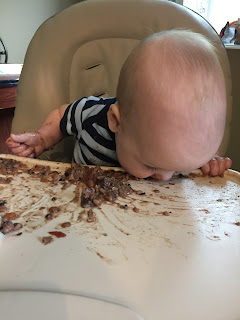 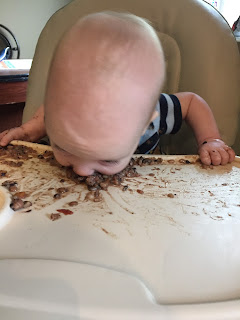 Going into our second month of BLW, I feel even more confident and assured that this is the right way to go for teaching Ben how to eat.  It is so fun to see him explore and vocalize his opinions of each food.  I'm excited to see where the next month of BLW adventures.

Posted by Amy's Nutritarian Kitchen at 4:48 PM No comments: Links to this post