Oh my goodness!  I can't believe it has been so long since my last post!  Instead of listing the excuses, I'm going to just get down to updates of my life!  Since I last posted we have gotten a bunch done on wedding stuff including making the display cake, and making and sending out the invites.

My mom has made our display/cut cake for the wedding day and froze it.  Its definitely not enough to feed all of our guests, so we are getting Costco cakes to serve.  I think she did a wonderful job and it looks so professional!  We calculated it out to cost about $20, whereas a cake this size professionally done would be maybe $200.  (Please note that this is NOT nutritiarian food!) Here are a few pictures:
We have also gotten all of the invites sent out and have already been receiving RSVPs back from those awesome "on-the-ball" people.  Here is our invite that April, one of my bridesmaids who is wonderful at calligraphy made, in which the original was copied and reprinted.  Everyone I've talked to so far has mistaken it for handwritten.  For April's sake, she is very happy she didn't have to make over 80 handwritten invites! Obviously for the sake of privacy, I have blurred out the addresses.  In the reprint of it the red and blue were a bit darker. 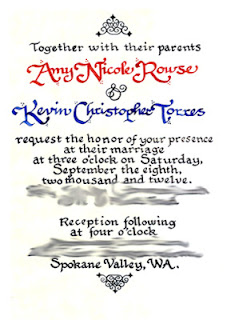 Now on to the real FOOD!  I was so happy to get invited by Shelby from Everyday Vegan Girl to join in her blog party that she has recently created with Carrie from Carrie On Vegan and Gabby from Veggie Nook (all are great blogs and you should check them out!).  This is the first ever "Healthy Vegan Friday", I hope it is a success, and I think I will continue to do this every Friday!  Hope you enjoy! 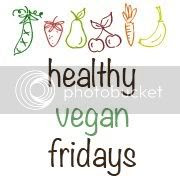 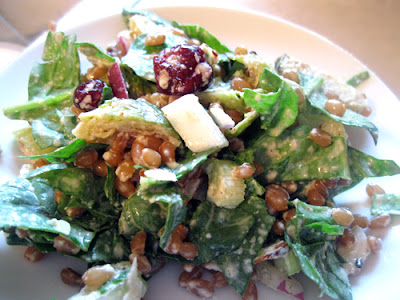 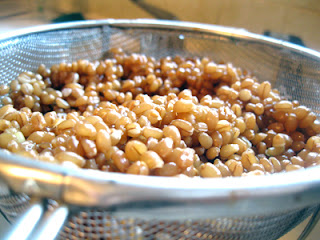 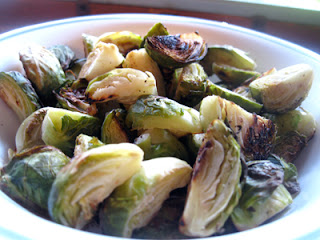 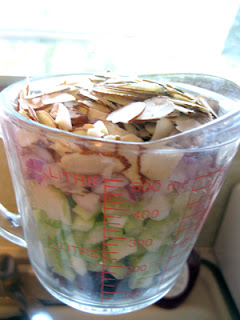 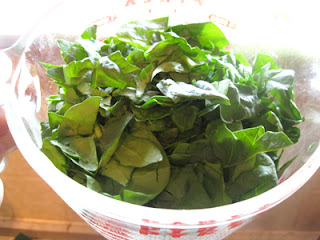 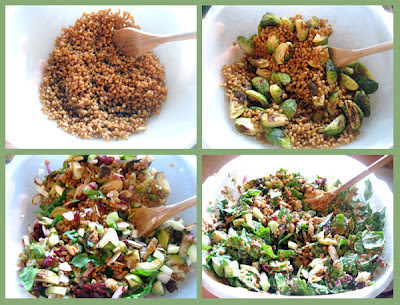 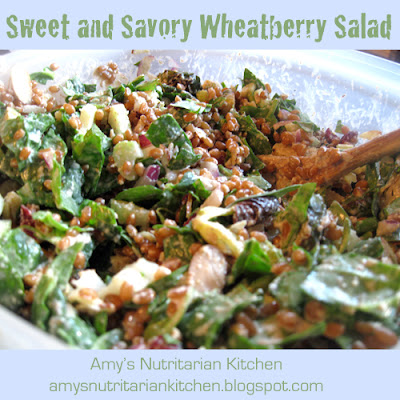 Amy's Notes:  The dressing recipe above definitely makes too much dressing than the salad will need, so make sure not to dump it all on top before stirring it in slowly.  The dressing is great on other salads as well.  I would suggest in order to save time to make the wheatberries and roasted brussels sprouts ahead of time.  Also, this recipe keeps really well in the fridge for up to 5 days.  I think it would be the perfect dish for a picnic or BBQ.... or lunches all week like I've been having it. 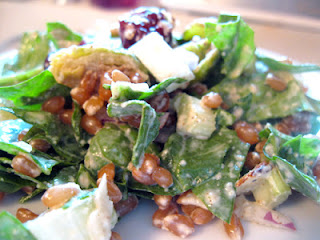 Do you have one day a week that you strictly eat vegan?  Are you an everyday vegan?  Are you toying with the idea of going vegan and why?
Posted by Amy's Nutritarian Kitchen at 5:37 PM 12 comments:

I hope everyone had a great Fourth of July. I spent mine going with my girlfriends to a local lake and tanning at the beach, then I went to a friends backyard party at his new house. I found that I was able to eat fairly well while enjoying the activities of Fourth of July. This included having a smoothie for breakfast, a veggie burger from Red Robin, and some veggies at the backyard party. The veggie burger from Red Robin was surprisingly delicious. I had the burning love burger with a veggie patty, guacamole added and a lettuce wrap instead of a bun.  Just delicious, and fairly nutritarian.

Overall this week has been very busy for me. I started my new job on Monday and have been getting the hang of it. I think they're pleasantly surprised by my effort and eagerness. Hopefully a raise will be coming after my 90 day review. Because I am working so much I haven't had much time to cook, let alone blog about it. And I realize that my Fourth of July post is a few days late, but I am doing my best.

In other news about my life, in Spokane the largest three-on-three basketball tournament in world happened last weekend, and Kevin was visiting for that. It was so nice to see him again after being away for over a month. He and his team won the championship for his bracket. Here are a few pictures. 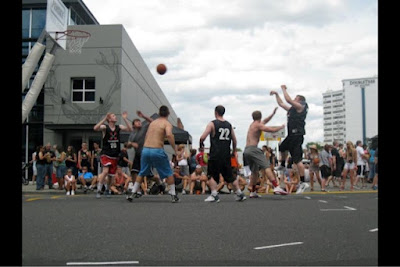 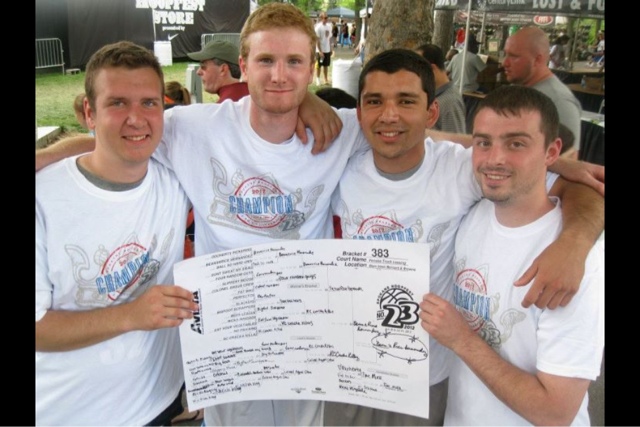 Unfortunately, when the tournament was over, Kevin and his his team had to head back to the West side of Washington. Then, on Monday I had my first day of work at Tradesmen International. I am enjoying it so far, but like best that I am finally making money better than spending it. Kevin and I also started our own cell phone plan. I had had some graduation present money left over from my parents that I had been saving, so I decided to get iPhone. It is literally one of the coolest things I've ever owned. For the last four years I had a first generation iPod touch, which has, quite frankly, been on it's last leg. In comparison, the iPhone is so fast and operates so flawlessly, I am just amazed. For example, I am writing my blog post today on my phone and using the audio to talk to it and tell it what to write. Pretty amazing, right? I'm not sure how well this will post, so bare with me.

Back to Fourth of July: As with most holidays, I wanted to try to eat something festive. On Pinterest so many Fourth of July foods and drinks were showing up, I thought I would give it a try too. Like I said above, the Fourth of July post a little late, but the recipe is still delicious for any day. 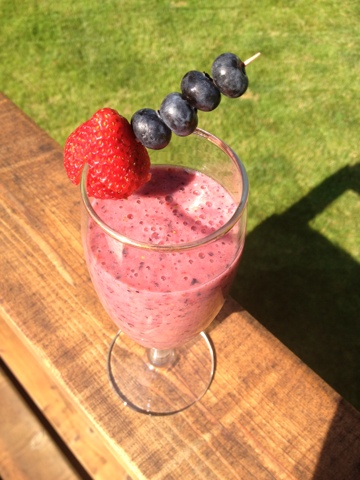 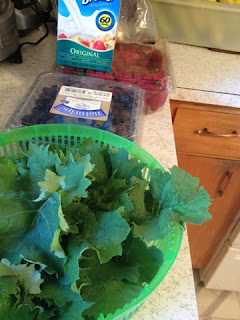 Directions:
Please all ingredients except for the extra garnish fruit in a blender and blend until smooth. Add more alternative milk to achieve the desired consistency. Serve immediately cold with the strawberries and blueberries garnishing the top of the glass for a festive look. 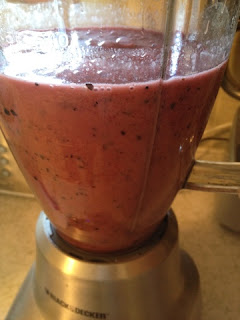 Amy's notes:
This can be a wonderful smoothie to be served as breakfast, or as dessert at the end of the day.  I used almond milk, but feel free to use any alternative milk you choose, preferably unsweetened.

How was everyone's Fourth of July holiday?  Did you have problems sticking to your health goals from being around traditional Fourth BBQ foods?