MmmMmmmMMMM!  Do I love stir fries!  Not only are they quick and easy to make, they use relatively inexpensive ingredients, are a breeze to clean up after, and are the perfect leftovers!  Stir-fries can also be quite versatile depending on what veggies, sauces, and spices you have on hand.  Tonight I made a stir fry from some veggies I was needing to use up, some rice I cooked this weekend, and a flavor I was craving, peanut butter! 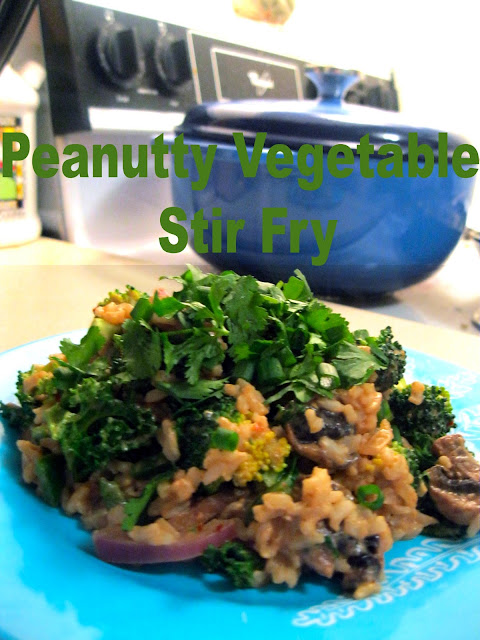 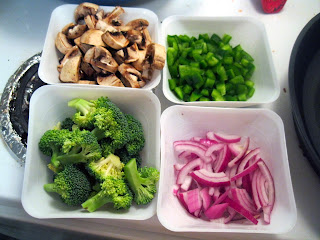 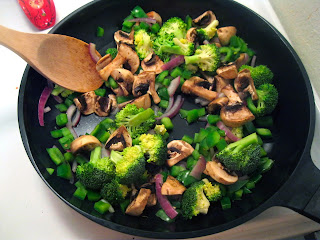 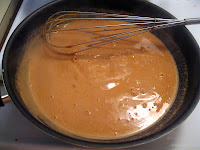 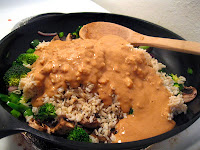 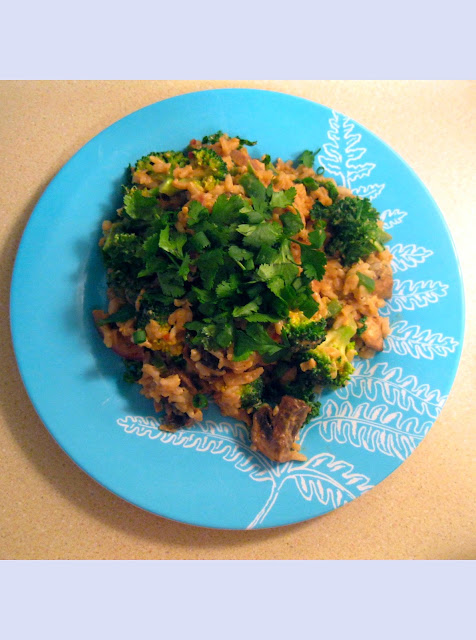 Happy Monday to everyone!  My day went pretty fast now that I am working less hours a day than I used to.  After work I was eager to come home and make the recipe I am featuring today.  On the way home from work I stopped at the grocery store in hopes to find some decent cilantro.  I haven't had this herb in it feels like months because the bunches always look so sad at the grocery store, but this time I found a fresh bunch!

While living at my parent's house over the summer before Kevin and I got married in September, I was able to eat off of their garden all summer long.  (Speaking of the wedding, I have bunches of pictures from the wedding that I was going to post on here a few months ago, but went on a blogging hiatus before I was able to.  Oh, I also have a video of our hilarious, choreographed first dance.  Would anyone be interesting in seeing these?)  They planted kale, green onions, and cilantro among other things.  It was so nice to have these veggies growing in the backyard just soaking up the sun.  Needless to say, over the summer I had many green smoothies and we often ate veggie fajitas with a bunch of cilantro on top.

This recipe was inspired by my craving for fresh cilantro and the need to use up a bit of the brown rice I made this weekend.  In it is shelled, frozen and steamed edamame just because I loved all of the green colors of the dish together.  If you don't have edamame on hand, feel free to use any other type of bean or legume you want.  I'm betting this would be great with black or pinto beans.  Mmm!  Hope you enjoy! 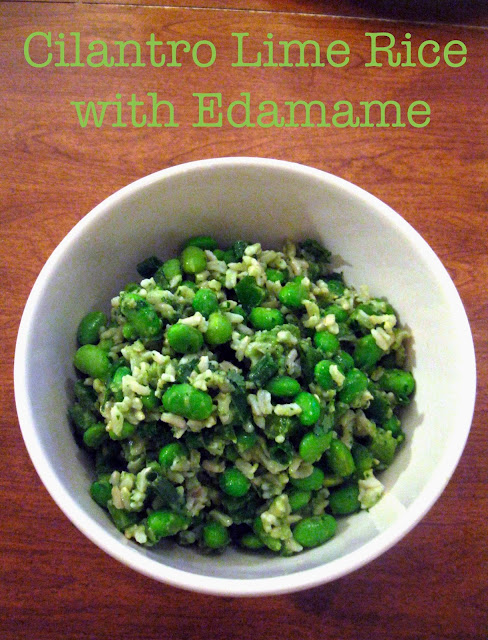 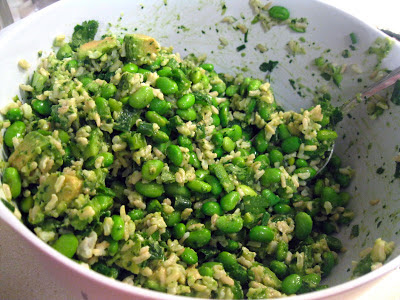 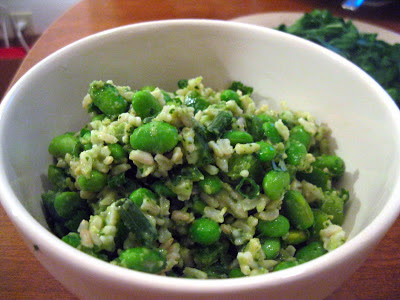 Would anyone be interested in seeing some of my wedding pictures from September... and possibly our funny joke first dance video?
Posted by Amy's Nutritarian Kitchen at 6:32 PM 4 comments:

I can't believe it's already Valentine's Day!  It's not necessarily a holiday I am particularly fond of, but I do enjoy seeing fun Love-Themed recipes in the blogosphere.  Has anyone else seen the picture tutorial on how to cut your carrots in heart shaped slices for soups?  How stinking cute!

Kevin and I usually don't do much for V-Day.  Generally we stay in and watch a movie with a nice homemade dinner.  I'm not a huge fan of crowds at restaurants, and an evening spent waiting too long for a table and getting sub-par food and service due to the increased business is not my idea of a romantic evening.  For those of you going out for dinner... Good Luck!

This year we are going to have another evening in.  I'll be making spaghetti and spaghetti squash with marinara sauce for dinner, with the following recipe for dessert.  Not sure if Kevin will like it, as he is a bit picky, but hopefully he will at least give it a try.  If not, I have an ice cream sandwich on standby for him hehe.  Then after dinner we'll probably just relax and watch a Netflix movie, hopefully one from our book of 501 Must See Movies that we have been working our way through for over a year.  (I know this recipe is REALLY similar to my last post of my Healthy Chocolate-Fix Smoothie, but I'm on a chocolate-spree this week!  Don't judge!) 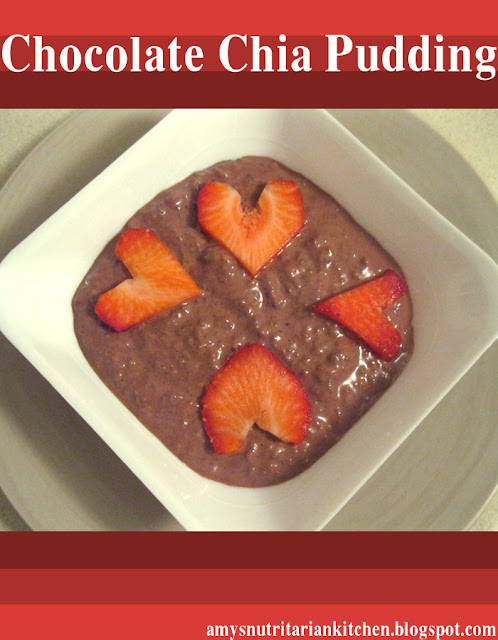 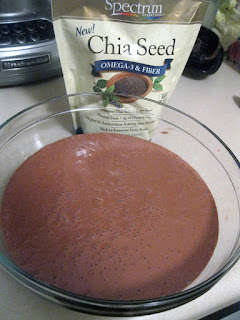 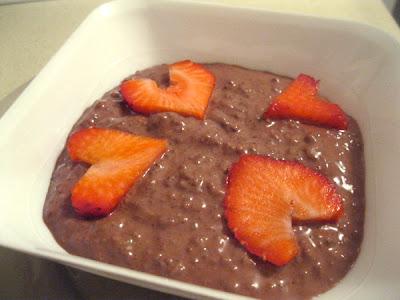 Do you have any fun plans for Valentine's Day?
Posted by Amy's Nutritarian Kitchen at 7:28 PM 5 comments: Links to this post 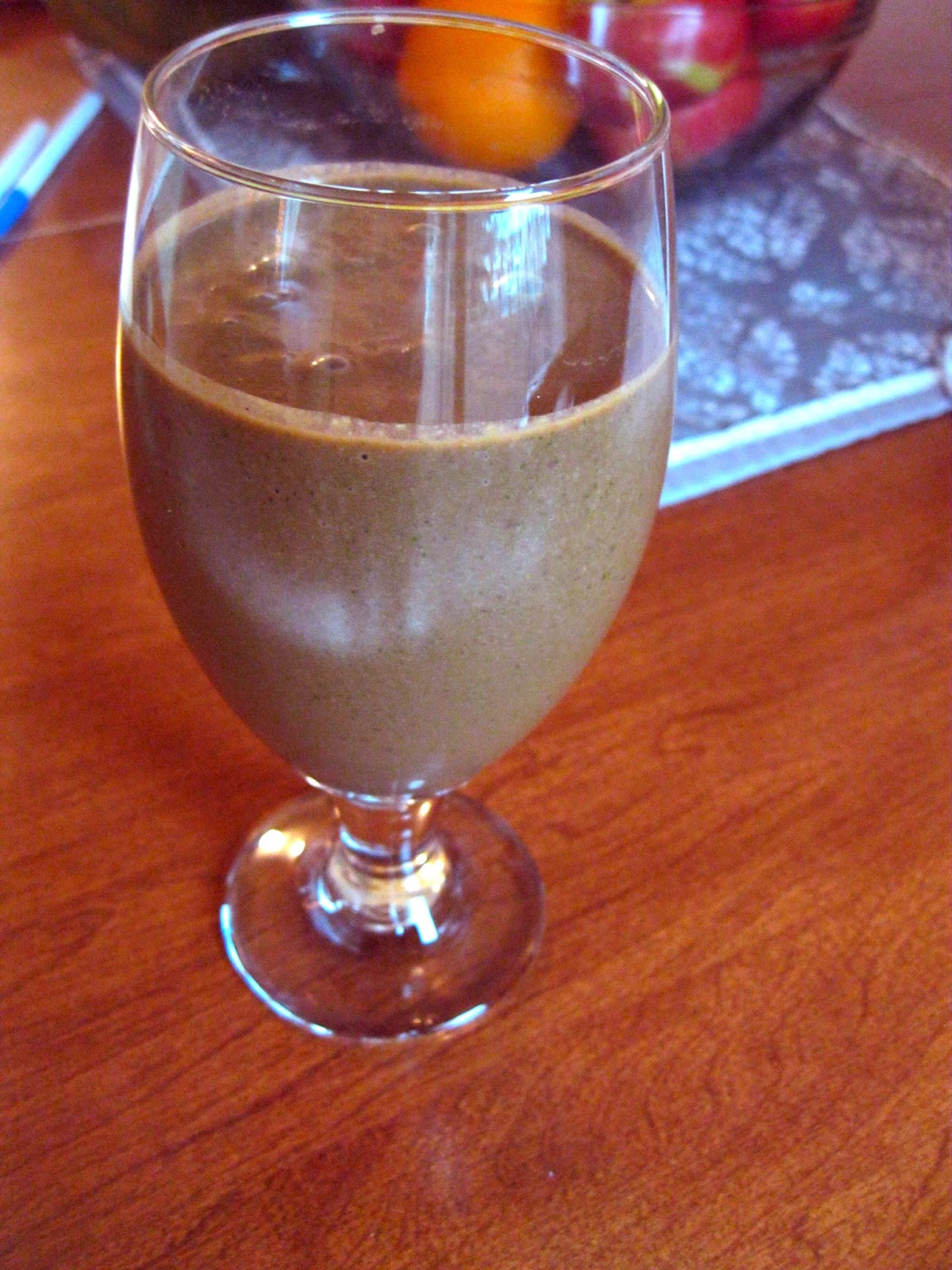 I hope everyone had a splendid weekend.  I'm currently getting over a bit of a head cold that I caught from Kevin, which he probably got from the school he works at.  I'm happy to have Monday and Tuesday off this week, and I will be starting a new job hopefully on Wednesday or Thursday!  Yay!

I'll give you a "quick" breakdown of how my life has been changing over the past few weeks:

I have been working as an Administrative Assistant at Tradesmen International since July, but in the beginning of January I had had a meeting with my boss that would change everything.  Since it was the beginning of the year, I thought long and hard about where I want to be in a year professionally, and I decided that I wanted to start pursuing careers in the field I graduated in, Environmental Science.  I have always been an honest person and appreciate when others are honest with me, so I sat down with my boss and discussed taking Thursday afternoons off so that I could have some time to start looking for environmental jobs.  Since I got all of my work done by noon most Thursdays, this was no problem, and he understood that I was going to be with them temporarily from the beginning.  I told him that it would probably take me months to find the right job that I was looking for, and that I would of course give him my two weeks.  He was very understanding and supportive that I wanted to go after something in my field.

Well... about three weeks late I had a few leads on some jobs I had been looking into, and even an interview.  However, I also found out that I was being "laid-off" and would be worked through the end of the week and replaced by "someone who is wanting to be with us long-term."  Damn-it!  This will definitely teach me to be honest when it comes to things like this.  It turns out that the person they gave the job to replace me was my boss's brother's friend/girlfriend.  They kind of got what was coming to them in the end though: when I went to pick up my final check, I learned that the computer I had been working on and had all of my documents and spreadsheets I had created to do my job efficiently had crashed.  All I can say is karma is a bitch!

So, I have been out of work for two weeks, but I'm happy to announce that I've taken another job as an Administrative Assistant/Project Coordinator at a well known engineering firm that has wonderful connections and gateways to environmental positions I hope to get to someday.  Did I mention that I work about 20 hours less a week than my previous job and that I get paid about the same?  I think that's a fair trade-off.  In the end, I'm a firm believer in thinking that everything happens for a reason.  I'm just happy that this led me to something bigger and better.

Now, on to my recipe.... I, like most women, get that time of the month when chocolate seems to find its way into my mouth one way or another.  I thought I would try making something that would hopefully be more forgiving than a candy bar.  All I can say about it is... it is supposed to make two servings, but if you end up having the whole thing over an afternoon snack, dinner, and evening snack... I'm not going to judge you ;). 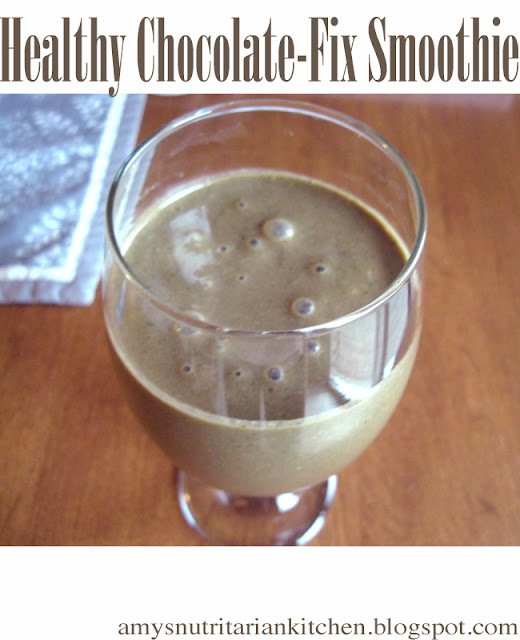 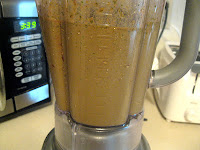 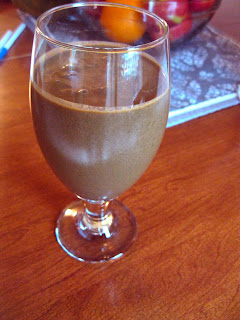 I hope everyone is having a great week!  I have been spending quite a bit of time in the kitchen lately.  A few days ago I attempted making my first nutritarian apple pie, a recipe I made up.  I made a few initial mistakes, such as trying to bake the crust before baking the entire pie, making the crust too tough, and I also put raisins on the sprinkled top, which turned out burnt and shriveled up.  Needless to say, I need to give this one another try before featuring it on the blog.

This morning I made a salad that took. for. EVER!  But it was so worth it!  It is probably one of my favorite salads I've made in a long time.  I'd suggest making only a half batch of the salad and the dressing, as it ended up making quite a lot.  Hope you enjoy! 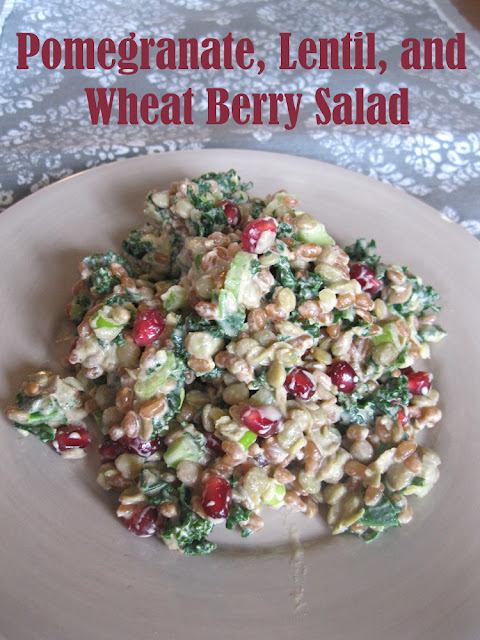 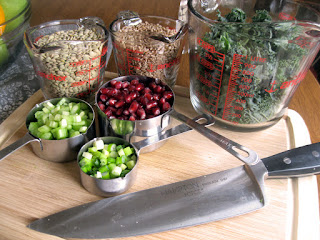 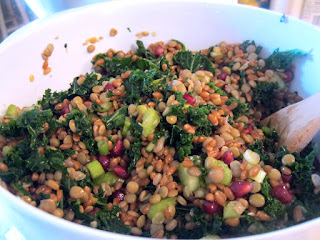 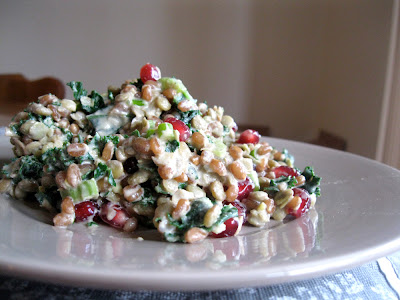 I hope everyone had a great weekend and enjoyed the Super Bowl whether the outcome for you was favorable or not.  We had only five people total at our place, but we had a great time none-the-less.  Kevin and our friend Ian took off to go pick up the wings that Kevin had ordered earlier that week from one of his favorite restaurants in town.  Unfortunately, due to the volume of orders for Super Bowl, they were running 30 minutes behind in their pick up orders... our order was supposed to be picked up at 3, but the game was to start at 3:30... oops.  I was strictly instructed to pause and record the game at kick off until they were able to get back.  By the time we actually started the game, we were around 40 minutes behind.

Since we preferred the Ravens this year, (the 49ers are in the Seahawk's division, so technically a rival) the first half of the game went just the way we were hoping, then the blackout happened.  Unfortunately, the Ravens got a bit tripped up after that, but we were able to fast forward through the sports guy commentary and catch up to real time.  In the end, it turned out to be a very exciting and suspenseful game.  During which we all ate and drank to our hearts content.  I tried to get down as many things from the veggie tray as I could throughout the day, but unfortunately a few things made it into my mouth that shouldn't have.  But that is the past, and today I have a great slaw recipe for you!

Every now and then I watch the Food Network just to get some ideas for recipes I can recreate and nutritarian-ize.  One gal was making a pork butt roast (not very appetizing), but along with it she was also making a cole slaw (much more down my alley!).  The base of her cole slaw was actually broccoli stems that had been peeled and julienned.  There actually wasn't any cabbage in it at all.  This afternoon I decided to make a similar cole slaw to clean out some of the veggies in my fridge.  Hope you enjoy! 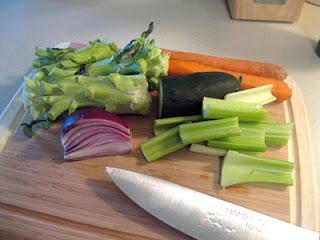 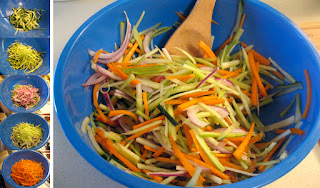 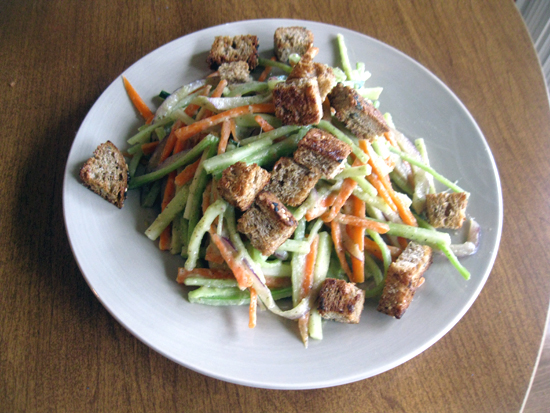